This Sunday is World Rhino Day! A day to celebrate rhinos and to share in our passion to save these iconic species from extinction. This Rhino Day you can help us spread the word about the rhinos’ plight by sharing our upcoming posts on social media, showing rhino movies, initiating classroom projects on rhinos, hosting a fundraising event, and contributing to organizations who are working to save rhinos. And what will we be doing on World Rhino Day? Well, we will be doing what we do every day – working tirelessly to save rhinos.

Tsholofelo, which means hope in Setwana, is a young female black rhino. Born in the Okavango Delta, she is a symbol of hope for her species.  Tsholofelo’s mother was brought to Botswana from South Africa, where she was at high risk of being killed by poachers for her horn. Now she is breeding and growing Botswana’s rhino population. For just £50 (or US$60) for the year, you can adopt Tsholofelo and help our vital work to save her species.

IN THE DEADLY GRIP OF DROUGHT

Our home, the Okavango Delta in northern Botswana, is an oasis kept lush in summer by afternoon thundershowers and in winter by an annual flood flowing down from the Angolan highlands. A World Heritage Site, the Okavango Delta is considered one of the greatest wildlife destinations in the world and is home to our beautiful white and black rhinos as well as lion, buffalo, elephant, giraffe, hippo and countless other species. Sadly, the region is now firmly in the grip of a severe drought brought on by a rare failure of both local and external rains. This, coupled with widespread fires, has left a barren and harsh landscape that is testing the wildlife’s survival skills. Elephants have begun digging open some of the dry pans to create waterholes, which they are dominating to the point of attacking would be interlopers. We recently found and treated two rhinos that were attacked by elephant in separate incidents. We did everything we could to save these rhinos yet one of the animals succumbed to her injuries.  Interestingly, while these extremely dry times test our rhinos and other large mammals, they are a boon for insects, insectivorous birds and scavengers. It is their time until the rains and floods return.

Even in these extremely trying times the black and white rhinos are breeding, which is fantastic news for their species. In the last few months eight white rhino calves and two little black rhino calves have been born in the Delta. The mothers of these new additions were all brought to the Okavango Delta from South Africa and Zimbabwe where they were at very high risk of being killed by poachers for their horns. Now they are not only safer, but they are reproducing which is particularly good news for the critically endangered black rhino.

We recently undertook three operations to tag rhinos across the Okavango Delta. Our pilot is an excellent rhino spotter and it is his job to locate rhinos in the tagging area. He then radios the team on the ground who move in with skill and precision to dart and immobilize the animals and fit them with transmitter devices. The GPS transmitters allow us to easily track and monitor the rhinos across the vast wilderness areas where they roam free. If a rhino has not yet been ear-notched (because it was born in the Delta) we take the opportunity to give the rhino a unique ear notch pattern by which it can always be identified. All three of the tagging exercises were highly successful and show the efficiency and teamwork that has developed between us and our partners, the Botswana Department of Wildlife and National Parks, Rhinos without Borders and Wilderness Safaris.

Our Patron, HRH The Duke of Sussex, took to the polo field in July to play in the 2019 King Power Royal Charity Polo Day to raise awareness and funds for the charities he supports. We are honoured to be one of these charities and we thank The Duke for choosing us to be a part of this special day.  The fundraising event took place at the Billingbear Polo Club, in Berkshire, UK, and brought together distinguished guests from around the world, including our Trustee Mr Jeff Blumberg.

At Rhino Conservation Botswana we believe that people living near rhinos should be involved in their conservation, should have sustainable livelihoods, and should understand the value that wildlife can bring to their communities. Therefore, we work closely with the local villages in the Okavango Delta and together we have identified opportunities to uplift their livelihoods. Early education and nutrition were identified as priority needs and in response we set up playgroups in three villages, with 90 children now enrolled in these groups. The groups are run by our community mobilizers who have been trained in literacy, first aid, environmental education and in creative ways of making toys for the pre-schoolers. The children, who range between 3-5 years old are also fed a Nutri-meal and taught a pre-school curriculum, with a focus on conserving their environment. 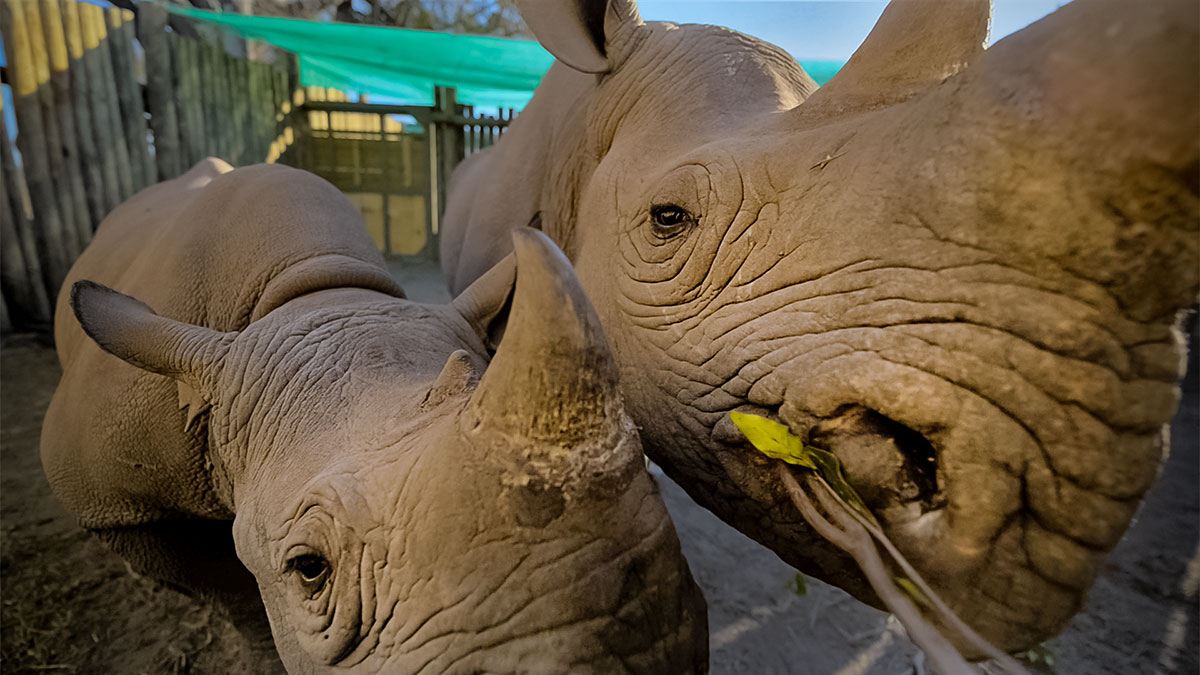 The global wildlife trade meeting (CITES) took place in Switzerland in August, adopting decisions on international trade rules for hundreds of wildlife species.  On the rhino front, the quota for trophy hunting of adult male black rhinos in South Africa was increased to 0.5% of the country’s black rhino population, which currently equates to nine animals. While seeming contrary to some, South Africa argue that the money raised through hunting aging black rhino males supports the conservation of this critically endangered species, and that the old bulls prevent younger males from mating, leading to inbreeding and a population slowdown. But while South Africa’s proposal was accepted, the proposed trade in white rhino horns from Eswatini (Swaziland) and live rhino and hunting trophies from Namibia were rejected.

As a charity, our efforts are only as strong as the support we receive, and we are grateful for your support.