I feel privileged to be invited to act as a trustee and I truly believe that we can play a critical role in ensuring that rhino are once again an enduring part of the Botswana wildlife landscape. 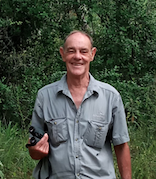 Derek was born and raised at the foot of Mount Elgon in western Kenya. Boyhood holidays were spent on safaris, particularly in the semi deserts of Northern Kenya.

In 1975, Derek came to Botswana as a 21-year-old apprentice professional hunter for a company based in Kasane in northern Botswana. After completing his apprenticeship and also qualifying as a commercial pilot, Derek guided safaris and flew charter aircraft based out of Maun and Kasane until 1990. Then he set up his own air charter operation, Safari Air, in Maun.

Derek says: “Historic records from Frederick Courtney Selous, who hunted in the area 1872 to 1876, describe abundant rhino populations in northern Botswana. But in 1976, the tracks of the region’s last known black rhino were seen in the Kwando area. The bull himself had not been seen for two years.

During my early years in Kasane, the first white rhinos to be introduced into Chobe National Park from South Africa were a common sight. By 1980, they had all been poached – a devastating end to a great initiative.

Therefore I am excited and heartened by the reintroductions Rhino Conservation Botswana has carried out recently.”